Bye-law 3 to Rule 40 of the Olympic Charter states that “Competitors, team officials and other team personnel who participate in the Olympic Games may allow their person, name, picture or sports performances to be used for advertising purposes during the Olympic Games in accordance with the principles determined by the [International Olympic Committee] Executive Board.”

Following the developments related to the modification of the Olympic Charter’s Bye-law 3 to Rule 40 (Rule 40) and inquiries about its incompatibility with the European Union (EU) law, we would like to: note our opposition to the above-mentioned rule; emphasize our support for the European Commission for protecting athletes rights against the abuse and express an openness to a dialogue and negotiations on this matter. 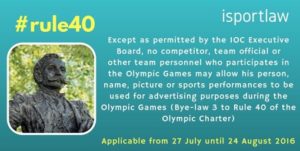