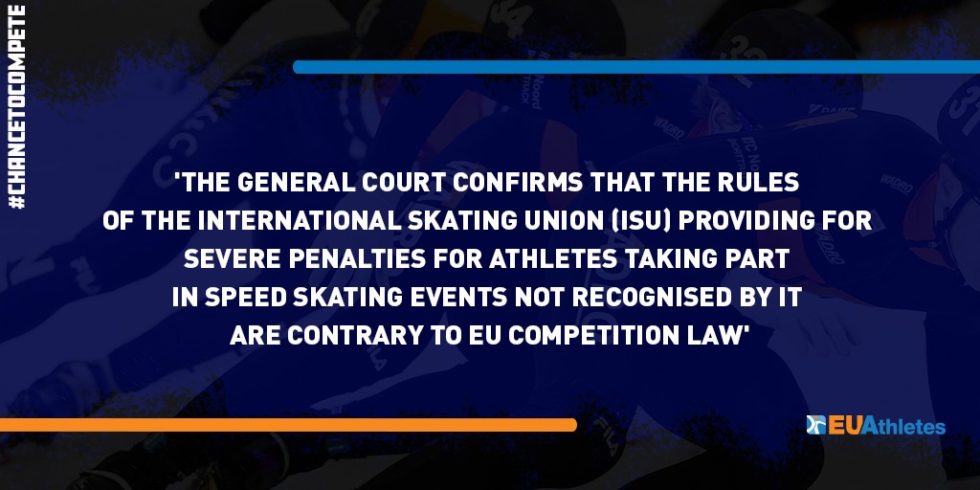 The decision is the result of a courageous decision of two Dutch speed skaters, Mark Tuitert and Niels Kerstholt to challenge their sports restrictive and unfair rules. The General Court upheld that, by depriving the athletes of a chance to compete in commercial events by imposing unfair and disproportionately punitive rules, the ISU abused its dominant market position to pursue its own commercial interests to the detriment of athletes and organizers of competing events.

Paulina Tomczyk, EU Athletes General Secretary said: ‘The General Court’s decision reaffirms that the sport organizations engaging in an economic activity have to operate within the EU law. The ruling provides welcomed clarity of the limits of the concept of the ‘Specificity of sport’. It’s an important step towards making the global sport governance fairer and making sure it respects athletes’ rights and interests.’

EU Athletes has been supporting Mark and Niels since their initial complaint back in 2014. We have represented the interest of the European athletes that are or might be affected by similar unfair rules imposed by their sport governing bodies. The skaters and EU Athletes intervened in the proceeding at the General Court in support of the Commission.

We would like to express our thanks to Bas Braeken and Jade Versteeg from Bureau Brandeis, who represented us and the skaters as third interested parties in the case and as well as to Ben van Rompuy for his ongoing support.

EU Athletes President, Brendon Batson OBE underlined the crucial role of the athletes in bringing a positive change in the world of sport: ‘Once again, we applaud Mark and Niels for their bravery and commitment to pursuing this case, which will significantly improve the situation of thousands of athletes around the world and help to modernise sports competitions. It is also an important message to sport federations that they should work in partnership with the stakeholders, especially the athletes, to develop the rules and the sport itself’.