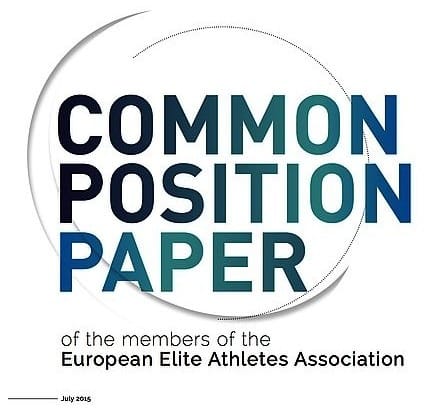 The Federation of independent athletes associations representing over 25,000 professional athletes is Europe is releasing the second position paper.

EU Athletes continues to develop its work with the European institutions in Brussels and Strasbourg. We enjoy a constructive partnership with the European Commission and represent the membership on a range of EU Expert Groups. We also look to engage effectively with the Council of Ministers and European Parliament.

In 2014, at our General Assembly in Helsinki (Finland), EU Athletes members voted to update and revise our Commons Position Paper from 2012, to take on board new developments and the new challenges faced by our elite athletes.

In order to the respect the basic principles of good governance, a task force, composed by EU Athletes members, was created to submit a new Draft Common Position Paper that could be debated, amended and ultimately endorsed at the EU Athletes General Assembly in June 2015 in Bilbao (Spain).

For EU Athletes President Yves KUMMER involvement of members was crucial : “EU Athletes is owned by his members. They have the expertise and day-to-day relations with athletes. It was really helpful to include them in the drafting process. The work they have done is tremendous and our staff will now ensure that the democratic views of athletes are heard within Europe.”

For EU Athletes General Secretary Jean-François REYMOND this will help to measure the effectiveness and success of EU Policy in the field of sport : “At the moment, there is a worrying trend in EU Policy that is going against the protection of Athletes basic rights. The sport movement continues to press for an exemption from many of the fundamental rights that other workers and citizens enjoy. Data protection rights, rights to privacy and even the right to fair trials are all currently under threat.  Sport needs to stop lobbying for exemptions and needs to up its game to ensure that it operates at a higher standard. Athletes must have the same rights as every other European citizen and employee.”